Guess who is back in action! My favourite tall rock talents, the Danish progressive metal band Royal Hunt:

While having a break from releasing new material (last album they issued was in 2015, “Devil’s Dozen”), the quintet have kept busy. Other that working on their own separate careers, they also managed to release a best of CD 2016 to keep their fans warm, did some touring… and prepared a new, bombastic, CD called “Cast In Stone”. As much as following the timeline of their usual, well known and well loved style, it also marks a new stage in their career, as it is different, more mature and more diverse than ever before. 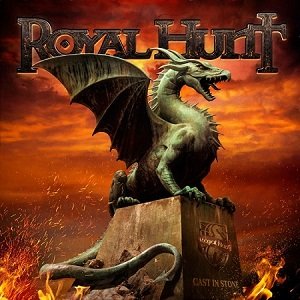 As Andre Andersen (below), composer/song writer and keyboardist, explains, if you have never heard their music before, this is the best album to introduce you to it,  reaffirming their signature style that is ever so recognisable and lovable. Elaborate, bombastic intros, catchy and easy to remember tunes, accompanied by multi-layered keyboards, symphonic melodic layers, masterpiece compositions, one of a kind main vocalist and delicious background chorus: this is what Royal Hunt are about. Their perfect melodies are one of greatest features of their music that has gained them fame and the love of millions of fans across the globe from their very early years.

There are tracks in this album that directly correspond to Royal Hunt’s older music. One of them is “Rest In Peace”, bringing about direct references with “One Minute Left To Life” (very similar intro), which then goes down Memory Lane into the “Paradox” era with that signature melodic style of composition, and eventually follows the scheme of “One More Day” (the refrain sang in the same beat and almost the same melody). Somehow, however, this is not a repetition or seeing ghosts of the past. It is just amazing how one track can take you through pretty much the whole history of the band.

One thing that is noticeable in the new album is how the music is taken to a new level. They have slightly gone away from the predictability of their usual sound (not meant as a criticism, but as a typical signature kind of music) and have expanded their horizon with more elaborate compositions. The guitars by Jonas Larsen (photo below) are as intricate as always. The opening guitar solos in “The Wishing Well” and “The Last Soul Alive” are examples of the classical Scandinavian power metal masterpieces. His fierce riffs give the music a sound lining, together with bassist Andreas Passmark’s perfectionist work, while also interrupted and enriched by Andre’s keyboard line.

And, last but not least is the one and only DC Cooper. Better than fine wine, this man sings more jaw dropping than ever. This is the real DC, a peacock revealing his true amazing colours. Until now, in Royal Hunt’s albums his beautiful voice used to follow the melody as it was written, restrained, yet giving the band an amazing performance. This time around, he is truly letting his pipes go. He is singing his heart out, in his own unique way. This is the DC you will hear in his solo projects, one of a kind vocalist deserving his place in the Rock Vocals Hall of Fame.

This is the charismatic front man who pretty much everyone has got a crush on:

In this CD, you will also hear the beautiful female background vocalists, and even an instrumental track (the title song). This is what Royal Hunt have always done very well. I can’t wait to see them again in the UK to enjoy a new instalment of their professionalism and charisma!

P.S. Those who may have expected a professional CD review here may be slightly disappointed. This is not why I wrote this article. This is a more of fan review, giving the band my support, and not even trying to hide my undying passion for Royal Hunt and DC Cooper. If you want to read my impartial and more professional reviews, click here to be redirected to the Midlands Rocks where I review new albums. This does include one of Royal Hunt’s albums as well.

What I write about